Have I told you that I don’t own a TV?  True story… I don’t.  I did – but it was only a 13-inch thing… and I realized that I was wasting too much of my time watching television.  So when I moved, I didn’t take it with me.  It’s been great – I’ve been reading more, biking more, seeing friends more.  Amazing.  Except for one thing.  I really, really enjoyed (ok… obsessively watched) watching the food network while I baked… especially Top Chef.  My solution… I download Top Chef and watch it on my MacBook – allowing me to still watch my favourite show, without don’t get sucked into the rest of it… because yes… I would get sucked in (ask Allison, former roomie).

The thing is… I bake… a lot.  So not only do I watch Top Chef… but I also put in a dvd or turn on my iTunes (seasons 1 & 2 of Rome have been viewed while baking pies, cupcakes, cakes…).  Last night my movie of choice inspired my baking.  I pulled out the movie Waitress.  I Love Love Love that movie.  For those of you who have never seen it, it’s about a  girl who bakes pies… lots and lots of pies.  Delicious pies.  Pies that are inspired by her life – husband, being pregnant… having an affair.  The story is great.  I think it’s especially superb because of all the pies.  Think Chocolat… only in the American South rather than in France.  And no Johnny Depp.  :0)

So last night I popped in the dvd and starting making a tart.  A chocolate ganache custard tart.  Holy Heck!  A-MAZING! 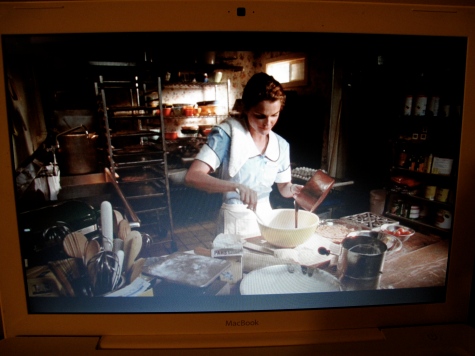 Based on a recipe found in David Lebovitz’s Ready for Desserts– which you all know I also love love love (thank you again Chloé for the best birthday present ever).  For anyone afraid of making a pie crust – try this tart shell recipe.  Seriously.  EASY as… well as pie.  It’s more of a shortbread cookie, you press it into the pan… you don’t have to deal with a rolling-pin.  You don’t have to worry about overworking the dough.  Trust me… anyone can do this.  Even YOU.

Grab your stand-mixer and your paddle attachment; beat together the butter and sugar on low-speed until just smooth (about 1 minute).  Add the egg yolk and mix for approximately 30 seconds, again on low-speed.  Incorporate the flour and salt, beating the dough until it comes together in a smooth piece.  Mine didn’t gather completely around the paddle attachment, so I just turned the mixer off and gather the dough into a disk by hand.

Grab a jelly bean size of the dough (pinch it off), wrap it up and set it aside.  You might need it later on.

Meanwhile, grab your 10-inch tart pan (with a removable bottom) and press the dough evenly across the bottom of the pan.  Try and spread it out evenly using the palm of your hand; then use your fingers to press the dough up the sides and rim of the tart pan.  All done!  Now place it in the freezer for at least 60 minutes.

Grab your frozen tart shell and place it on a cookie sheet.  Then prick the dough with a fork.  Bake for 7 minutes.  Remove from the oven; you’ll notice that the tart shell has started to puff up – grab your metal spatula (don’t be like me… I used my hands… baked butter and flour@ 375 kinda burns) and press it back down – be gentle.  Return the crust to the oven and bake until golden brown; between 15 -20 minutes.  Keep an eye on it.

Now… this is when you might need to use that jelly bean-sized piece of dough (remember, the piece you pinched off before forming your tart)… if there are any large fissures, fill them with pieces of the raw dough; that way you’ll fill the cracks.  Don’t worry about having to bake it – the heat from the still-warm tart will firm it right up! 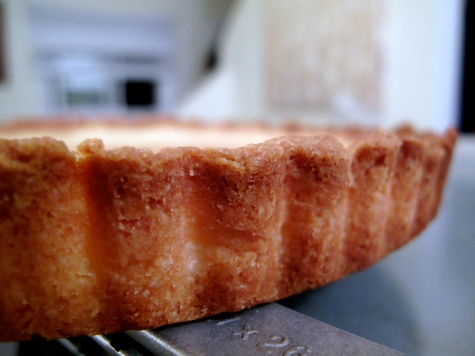 tart ready to be filled

Otherwise, simply remove from heat and allow to cool on a wire rack (still in the tart pan).

According to David Lebovitz – you can store this crust unbaked (either in a disk or already in the tart pan) for up to a month in the freezer.  Otherwise, if baked, it should be used the same day.

10 ounces semisweet chocolate, chopped (I used disks… no need to chop those!)

*Prebaked tart shell (as per recipe above).

Bring an inch of water to a simmer in a medium-sized saucepan.  Meanwhile, combine the chocolate and cream in a large, heatproof bowl.  Set over the pan and allow the chocolate to melt; stirring occasionally until smooth and well combined.

Remove the bowl from the heat and whisk in the egg yolk, egg, and the sabra.  Pour the mixture into the prebaked tart shell, gently tilting the pan so that the filling evenly spreads out.

Set the pan on a cookie sheet and bake until the filling looks almost set but still quivers when the tart is jiggled – about 20 minutes.  Allow to cool completely.

Now for the awesome tip… (wish it was mine… but just as I borrowed this recipe from David Lebovitz… I’m borrowing this tip as well).  To remove the tart and not damage the sides or filling… place your tart pan on a large wide surface (can of tomatoes, large mason jar work well).  Gently press down the outer ring and allow it to fall to the countertop.

i used an old peanut butter container (now filled with flour)… David Lebovitz… you are brilliant!

Set the tart on a flat surface and release the pan bottom by sliding the blade of a knife between the crust and the pan bottom, then slip onto a serving plate.  If not… just serve directly from the base.  No big deal.

There you go!  My tart.  All done.  Started and finished while watching Waitress.  :0)

a view from the top