*author’s note – some of the pictures used in this blog have been shared by Rick Bond, who attended and took some pretty fabulous photos.  Thanks Rick for allowing me to use them. If you’d like to view more of Rick’s photos – please feel free to click here*

Capital Cupcake Camp 2010 has come and gone… and I can say… it has really impacted my life.  I went.  I sat.  I tasted.  For 2.5 hours.  That’s right friends, Chef (Michael) Blackie, Kady O’Mally, Alan Neal and I sat, tasted, talked and voted on our favourite cupcakes.  For 2 and a half hours.  That… is intense.  And perhaps a little insane.

But we sure did laugh.

Maybe it was the sugar.  Or our own witty little comments… but Cupcake Camp made us laugh and smile… and I think it made everyone who entered feel the same way.  Bakers and tasters united to raise over $6000 for Women Alive / Femme Active Program and the Youth Services Bureau.  How amazing is that?  All thanks to the little ol’ cupcake!  I’m so stoked to have been a part of that.

But back to the judging.

We decided that we would rate the cupcakes on a couple of things… obviously taste, moisture level in the cake, cake to icing ratio, sugar vs. flavour, and frosting consistency.  Sounds pretty professional right?  Armed with our note pads, pens and critical taste-buds, we set off – starting with the BestVegan category. 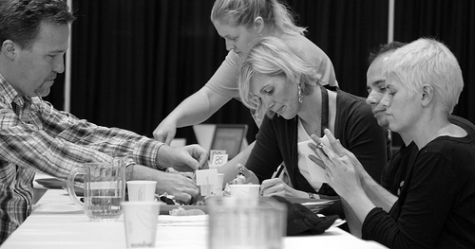 Holy heck… we were really impressed.  Great flavours, interesting textures, super creativity.  We voted #56 – a carrot ginger cupcake the winner.  I LOVED how moist the cake was.  My first comment was “solid.” That was one solid cupcake that won us judges over.  High Five to #56!

Then it was time to sample the 27 cupcakes entered in the Tastiest Twist on a Traditional (fyi – I love the name of this category…since it includes a twist).  Someone made a french toast with strawberry filling cupcake (#22). And the cake really did taste like french toast!  Another contestant created a peppermint twist cupcake (#46) – a pretty little red and white cupcake – that looked like a chirstmas mint – it was even encased in plastic.  Solid interpretation of a mint in cupcake form.  There was even a margarita cupcake (#17) – real alcohol – spot on with the flavour and well executed.  We were all pretty wowed by a lime coconut cupcake (#47) – super fresh, intense lime flavour… my personal favourite of the bunch (I heart limes) – I do believe I can quote Chef Blackie who’s first reaction was simply “wow”.  In the end however, the four of us decided to award #16 the winner: a chocolate 5 spice cupcake with caramel topping.  Super intense flavour – but in a good way.  Nice and dense cake and excellent (really excellent) frosting. 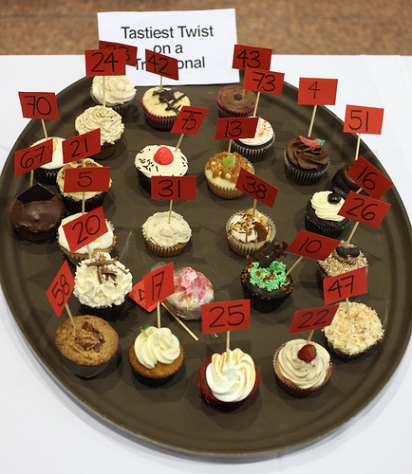 the tray that awaited our judgment… 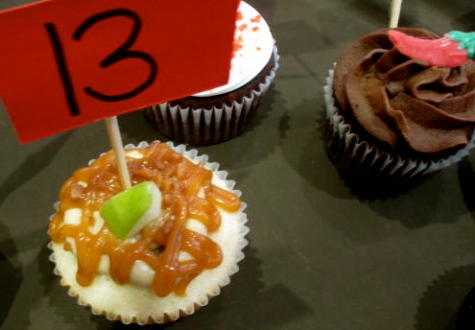 We made the mistake of taking a little break.  The thing is… when you stand up and walk around after having sampled 38 cupcakes in less than an hour… well you kinda, sorta realize that you’re full.  And yet… we still had to judge: best savory cupcake, best filling, best decorated (no tasting required! hooray!); then we also had the PRO categories to judge: most original, best overall, and again, best decorated.   The good part about the break though is that I got to talk to some of the bakers and tasters (including some of my friends who showed up: Audrey, Mary, Zarah!!!), which is really what this entire thing is about.

It was time to get back to the tasting.

Best savoury cupcake – a nice break from all the sweetness we’d been sampling – there was a successful basil and olive oil cupcake (#79) – the cake was excellent, and moist.  I remember Kady really enjoying it.  But the cupcake that got all of us excited was the “coleslaw” cupcake (#3) – so named by Blackie because of the cupcake liner used… a brown butter pumpkin spice cupcake – AMAZING.  Super moist, super flavourful… so well balanced.  We all agreed it was our top for the category.

Best filling in a cupcake – more sweetness in the belly.  Seriously at this point we moved the jug of water a little closer to us, and I think Alan might have wanted to bow out of the judging.  We wouldn’t hear of it… and so we all just dug right in.  Literally.  Fingers dug into the cakes searching for the filling that would excite our taste-buds; nanaimo bar, salted caramel, peanut butter, boston cream pie, ricotta stuffed cupcake, orange, pumpkin, and Irish chocolate (really tasted of good ol’ Bailey’s Irish Cream).  We picked #48 – a salted caramel that was so gooey and delicious, I think we all dug in more than once… which at this point in the judging says a lot.

Best decorated provided all of us with a little reprieve… heck… perhaps we haggled our decision a little longer than necessary just in order to allow our stomachs and taste-buds a little break :0)

I personally (and yes, this is my own personal opinion) was completely enamored by #28 – it was simple, and pretty, and I just couldn’t stop looking at it.  In the end we picked #2 to be our winner – Blackie and Kady were especially impressed with the beautiful workmanship in creating the little acorn and leaf.

Time for the PRO’s.  I have to say… Auntie Loo’s – you’re cupcakes were BEAUTIFUL!  Those trees were perfect!!!  I fought for you’re cupcake to win the PRO best decorated…. but… well #101’s cupcake won.  It had a scull.  That was pretty darn impressive.  And the skull glittered… another bonus feature.  It really was a difficult category to judge… everyone that came out produced a solid cupcake. 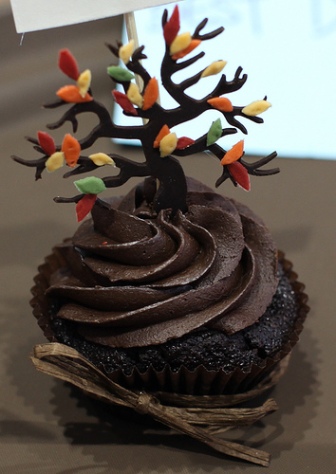 but this one is super cute too… right?

When it came to PRO most original we um… picked a pumpkin cupcake (#97).  It was AWESOME.  I particularly enjoyed the frosting… or at least that’s what I wrote down in my notes :0)  (I have to trust my notes at this point… I was in a deep sugar haze)

Finally it was time for the PRO best overall.  This is where there was a bit of a controversy… it seems that some people didn’t appreciate the fact that we didn’t actually sample each and everyone of the cupcakes entered in this category.  In our defense (yes… I’m defending us judges), being best overall means that we had to be pretty darn wowed by the decoration and aesthetic of the cupcake.  And when you’re comparing some of them… well you are drawn towards the ones that look pretty spectacular.  And when you’re coming up to almost 100 cupcakes sampled, removing ones that don’t qualify for best overall (and decoration is a huge component of that category) kinda makes sense.  Non?   Therefore we set aside some of the cupcakes.

one of the PRO options… awesome looking eh?

That left us with 5 more cupcakes to sample.  Seriously people… I won’t lie – it was getting a little difficult to willingly grab a piece of cupcake and place it in my mouth.  My stomach was starting to hurt a little (ok, alot) and it took all my self-discipline to actually want to try and eat anything else.  My favourite of those judged was #87.  It was Blackie’s, Alan’s, and Kady’s favourite too.  Done and Done!

That was pretty much the end of our afternoon.  2.5 hours of cupcake tasting and giggling.  All for a good cause.  I’ve never experienced a sugar high like that one… and I need at least another year before I can do it again. 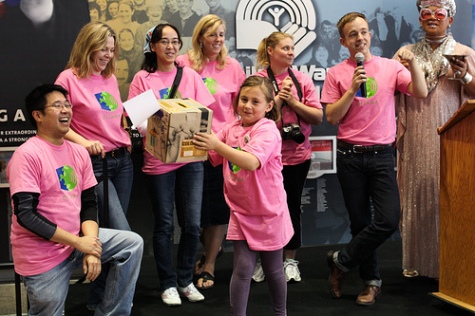 *special thanks to the organizing cmtt – Don, Jenn, Jenn,  Andrea, Ian… thanks for including me in the event.  Super awesome fun times!   yes… even if I had cupcake heartburn :0)

12 thoughts on “no more cupcakes…”