My third Sunday with the baked group.  Am I glad it was this recipe.

We know that I’m a huge fan of pies & tarts.  They are my true baking passion (that’s right folks – cupcakes are not my favourite thing) – and so when I noticed this recipe on our schedule I got excited.  Like really excited.

When I first looked at the list of ingredients I got a little concerned.  Would this be a bit of a hassle?  Would I get annoyed with the pastry dough?  Would it taste too much of almond (a flavour that I think can sometimes be overpowering)?

I figured the best way to find out would be to make these.

First off – I decided to make them into mini-tarts.  I was bringing them to a party – and figured that it would be easier to nibble on a smaller version – as well – more people were likely to take one, since a tiny tart doesn’t seem like too much.

I made this over the course of three days.  I really should have read the recipe better – in order to really manage my time, I should have made the almond pastry dough and the white chocolate ganache on day one, and then assembled everything on day two.  Instead, day one was the tart dough,day two was the ganache, and finally, day three was the filling and assembling.  Even with the decision to spread this recipe out … it was easy as … pie (but you knew I was going to say that didn’t you). 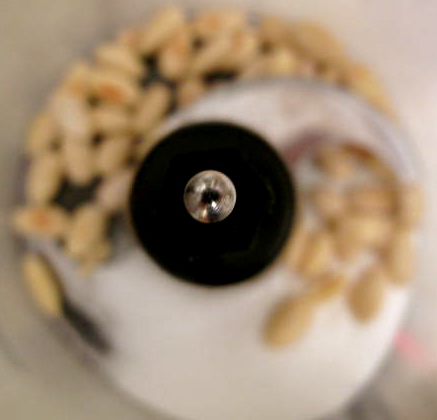 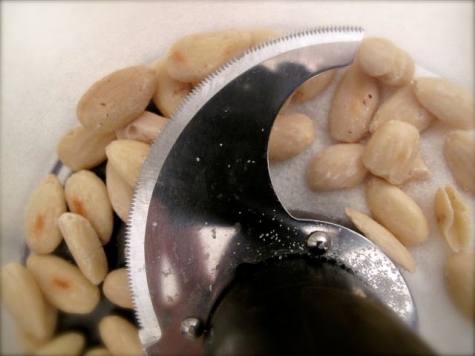 I really loved making this dough – especially since you use the food processor.  I could feel the dough come together once I added the cubed butter … all that was left for me to do was to knead it a bit by hand (just enough to gather the dough) and then wrap in plastic wrap.  I chose to chill it overnight in the fridge.

One very important thing to note: this dough is sticky.  Not just a little.  A lot.  In the end I attempted to roll it out three ways:

(1) lightly floured surface – it worked for a couple of the tarts.

(3) I rolled up little balls of dough and then pressed the dough into the base of the tart pan and up the sides.  This was the least annoying option.

Mini tarts done.  I blind baked them for 8 minutes filled with dried chickpeas, and 10 minutes unfilled.

While they baked, I started on the white chocolate ganache for the filling.

The entire filling is dead simple.  The only thing I did differently from the original recipe would be that I used sweetened flaked coconut rather than unsweetened – it’s what I had on hand – and to be honest, the white chocolate ganache isn’t overly sweet … so adding some sweetness to it, isn’t a bad thing. 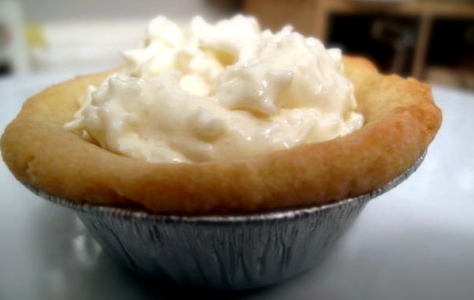 Once the filling was done and was cooling in the tart shells, I pulled out my dark chocolate (I didn’t use the milk chocolate – dark chocolate combo as mentioned in the recipe) – (1) I figured it would counter-act the sweetness of the coconut and (2) I had some good dark chocolate from my trip to France that I thought would be a nice touch.

I topped my mini tarts – adding the whole blanched almond as a finishing touch.

Beautiful.  I then tucked them away in a tupperware and waited to bring them to my party.