Oh what an awesomely fun weekend I had!

I decided to extend my already long weekend and spend 4 days in Halifax / Prospect Village … hanging, laughing and baking with the wonderful, talented and lovely Jenna Durling, aka little red kitsch’n.

After spending 3 weeks together last summer, we decided to do it again.  The only low point … that I had to leave on Sunday morning and couldn’t stay longer.

Plus … Jenna is so inspiring.  She was whipping up her clam chowder while I was chopping up all the vegetables to go into her quinoa salad.  She was enhancing her already insanely delicious wild rice salad (one of the best salads I’ve ever had), while I was making a big batch of lemon curd … and the cupcakes …vanilla, chocolate, carrot and red velvet …

Oh.  Another thing I heart about being in a kitchen with Jenna … we use at least one of my recipes each week at the market.  True.  Over the summer … those peanut butter cookie dough double chocolate brownies … mine.  Those cranberry-lemon-lime-white chocolate mousse squares my idea too.

This time round I was asked to come up with a cupcake flavour and we made my coconut, toffee oreo cookie bars (recipe to follow … but my co-workers have called them “heaven in a bite”)

Oh yeah … plus I made two hello kitty cakes.  For realz.  One was for Peter from the Fish Shop (he sponsored me for my ride the rideau) … he didn’t ask for anything in particular … but I thought he would find the cake hilarious.  He did.  And he enjoyed eating it as well :0)  And the second ended up being bought by Graham (Gateway Meat Mongers) … he pretty much loved the cake the moment he saw me arrive with it … at 6 am :0)

With the pressure of the 5th cupcake flavour on my mind… I decided to go old school.  A classic.  A cupcake that always reminds me of my grandmother (although she never made it as a cupcake).  I actually have her hand-written recipe card on my fridge … a small token to make me smile and remind me of her.

I decided to go ahead with the queen elizabeth cupcake.  Except … with a twist.

But not very handy when baking for the market.  We like to pipe the cupcakes on the spot … and spooning the mixture on top of each mini cupcake didn’t really appeal to either Jenna nor I.

So we decided that a sweet cream cheese frosting would still compliment the spicy cake.

And since it’s a queen elizabeth cake … we decided to colour the frosting with a little teal food colouring … more regal looking … don’t you think?

The result … an adorable little cupcake topped with some sprinkles.  And it tasted pretty awesome- a little spicy since I added cinnamon and nutmeg to my grandmother’s original recipe.

It turns out that I still had these cupcakes on my mind when I got home on Sunday afternoon.  Since I already had the dates in my pantry, I figured it’d be nice to make another batch.  Only this time … I figured I could twist the recipe up again: I decided to incorporate the brown sugar and the coconut into the cake batter.

Preheat your oven to 350 F.  This batter will make a 9-inch round cake, or 5 dozen mini cupcakes, or 2 dozen regular cupcakes.  Line your cupcake pans with liners.  Set aside.

In a small saucepan over medium heat, bring the water and chopped dates to a boil – you want them to boil down and thicken (and the water to evaporate).  Stir so that they don’t stick to the bottom (lower the heat if you need too).  Then add the baking soda.  It’ll bubble.  Awesome.

Remove from heat and allow the mixture to cool (I never let it get to room temperature … but I do let it cool about 10 minutes).

In the bowl of your stand-mixer, beat together the butter and sugar.  You want it to become pretty fluffy … so this should take about 5 minutes.  Add the egg, continue to beat at medium speed.  Then add the vanilla, nutmeg, cinnamon and salt.

Add the date mixture to the batter, increase the speed to medium and beat until everything is incorporated.

Reduce the speed of the mixer and slowly add the flour until everything is just barely blended.  Turn off the mixer and fold in the toasted flaked coconut with a spatula.

Spoon the mixture into a piping bag – this allows you to fill the mini cupcake liners mush faster and easier than if you have to spoon them into each paper liner individually.  If you are making regular sized cupcakes, use an ice cream scoop, and if a 9-inch pan, simply pour the batter directly into your pan (previously sprayed with non-stick pam).

Baking time will obviously depend on what you are making.  Mini cupcakes should be done in 13 minutes.  Regular in 17 minutes, and a cake can take anywhere from 25 to 32 minutes.  You want the top of the cake to bounce back when you gently press on it.  It’s a pretty moist cake, so don’t worry if it seems a little under-done.  No one likes a dry cupcake (or cake).

If making cupcakes, remove the pans from the oven and immediately take the cupcakes out of the pan and cool on a wire rack.  If you baked a cake, allow it to sit in the pan for 10 minutes and then run a metal spatula around the sides and turn it over onto a wire rack to cool. 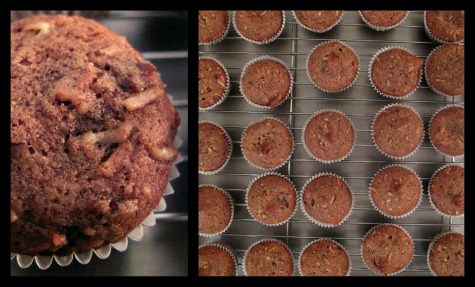 Spoon your frosting into a piping bag and pipe a little on each cupcake.  I like the look of the star tip … but it would look good with a large round tip as well!

The best way to describe these cupcakes … “they taste like a hug from your grandmother feels …” Comfort baking at its best (and yes… you can quote me on that).

1 thought on “a visit with jenna”